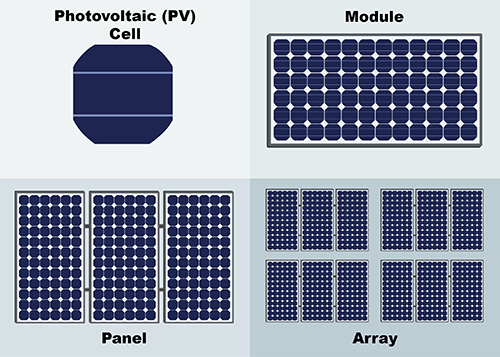 Q: How much PV do I need for my house?

Answer:
How much PV you need depends on your power loads and their duty cycles. If you wanted to completely replace your current electrical purchases from the utility with a PV system, you could look at your kWh usage on your electric bills for a year, calculate a daily average, and divide that by the number of average daily sun hours for your location. (3600 kWh/yr divided by 365 days/yr equals approximately 10 kWh/day, divided by 5 sun-hours per day (for locations in middle America), equals 2 kW. This would indicate that a 2-kW system would, over the course of an average year, produce enough energy to replace the power you are currently using.

However, if you design an energy efficient home, you could cut the annual electricity usage dramatically, reducing the size of the system. In the real world, the majority of home systems range from 1 kW to 2 kW. Where you live, if you are on the grid or off, and how you live, will dictate the size of your system, and its ultimate cost and value.

Q: How long will PV last?

Answer:
PV modules have been tested in controlled settings and in the field, with results showing module lifetimes in excess of 20 years. Other system components have varied lifetimes (batteries can last 2-15 years, and power electronics are the most sensitive components).

Q: What kinds of PV are available?

Satellites and other space applications have used single-crystal silicon, single-crystal gallium arsenide, and test systems of thin-film materials.
Several companies are manufacturing thin-film modules of cadmium telluride (CdTe) and copper indium diselenide (CuInSe2, or CIS), but these are mostly pilot production at this time and are not available in commercial quantities.

Q: What makes up a PV system?

Answer:
PV is used in space, in consumer products, in remote communications, in village power systems, in traffic signs and lights, in cathodic protection systems, in road-side emergency call boxes, in grid-connected systems (residential or grid support), in remote homes, and many other applications.

Q: What are the markets for PV?

Answer:
The largest market for PV today is in developing countries, in village power and remote communications systems (estimates indicate that more than 2 billion people world wide have no access to conventional electric power; if they have electricity, they use batteries or diesel generators). There are projections of large markets for utility grid support and for building-integrated PV systems in developed countries.

Q: How long has PV been around?

Answer:
The photovoltaic effect was first recognized by Edmund Bacquerel, in France, in 1839. Scientists made solar cells of selenium in the 1880s. And, modern PV technologies were developed at Bell Labs and RCA Labs in the mid 1950s.

Q: I’ve heard that it takes more energy to manufacture PV than it will produce over its useful life. Is that true?

For other materials, estimates for amorphous silicon are just more than a year for making up their energy cost; I’ve not heard any numbers on the polycrystalline thin films (CdTe, CuInSe2), but their energy payback would also be quite short; and I am unsure of the payback for concentrator systems.

Answer:
Yes, however battery storage must be used. This type of system is extremely popular for homeowners and small businesses where critical backup power supply is required for critical loads such as refrigeration, water pumps, lighting and other necessities. Under normal circumstances, the system operates in grid-connected mode, serving the on-site loads or sending excess power back onto the grid while keeping the battery fully charged. In the event the grid becomes de-energized, control circuitry in the inverter opens the connection with the utility through a bus transfer mechanism, and operates the inverter from the battery to supply power to the dedicated loads only. In this configuration, the critical loads must be supplied from a dedicated sub panel. Figure 8 shows how a PV system might be configured to operate normally in grid-connected mode and also power critical loads from a batterybank when the grid is de-energize.